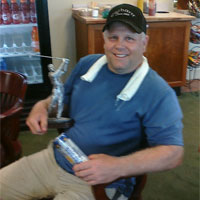 Round One Summary
BGA stalwart Frank Mejia took the early lead with an opening round 78 in his battle with playing partner Bobby Brunner, 79. Eduardo Urruttia was in third with a 77. On the fourth hole, Steve Flynn‘s 137 yard approach found the bottom of the cup for an eagle two on the par 4!

Round Three Summary
Sunday, Bobby Brunner eagles the par 5 fifth hole from 30 yards off the green from out off the rough with a fine chip shot that broke a good 10 feet into the hole. His final round 35/37 73 is too much for Jim Frenette to overtake despite an eagle of his own on the par 5 15th coming by way of a 225 yard 3 wood into the wind that landed and stopped within 6 feet of the pin.

* Net scores were determined using the difference between the lowest handicap in the field (Brunner @ 11 = 0) vs. the rest.   ** Unfortunately, Eduardo Urrutia had to leave after two rounds and was thus disqualified.